A short drive along a single track road off the main road you come to the hamlet of Balquhidder. It’s a sleepy collection of old farm buildings and cottages nestled around the quaint Balquhidder kirk (church).

There are two notable buildings adjacent each other, the original Church that was replaced in 1631 by what is now referred to as the ‘Old Church’ and the Parish Church that was built in 1855 next door. The old church now being a ruin.

It is more famous than most kirks in Scotland because of the association to the Clan MacGregor and specifically Rob Roy MacGregor who is buried in the graveyard and whose story has become internationally famous.

Rob MacGregor was born in nearby Glengyle at the head of Loch Katrine in February 1671. He was the third son of then clan chief Donald Glas MacGregor of Glengyle. Rob led an interesting and turbulent life and by the time of his death he had become a hero across the highlands. He was a Jacobite crusader, a businessman, a cattle-rustler and an outlaw who had more than his share of brushes with the law and aristocracy.

His story was popularised by Daniel Defoe who based his fictional 1723 publication “Highland Rogue” which was based on Rob’s life and times. The biography was published while Rob was still alive and in part led to a Royal Pardon in 1726 allowing Rob to live out his final years as a free man. Because of his reputation and life he became known as the Scottish Robin Hood.

Rob died in 1734 age 63 and was buried a little to the east of the Old Balquhidder Church. Interestingly a plaque built into an ornate railing around his grave wrongly states his age at death as 70. As was common practice, his widow Mary Helen MacGregor and their sons Coll and Robin MacGregor are buried alongside Rob.

Interestingly, Rob’s mother Mary was from the mighty Clan Campbell (inter-clan marriage was frowned upon in the highlands as it polluted clan bloodlines) and Rob inherited his red hair from her. This lead to his nickname, Rob Red (or Ruadh in Gaelic) which was anglicised into Rob Roy.

A stone in the kirkyard records how the MacLarens were attacked by the MacGregors of Glen Dochart in 1558, murdering 18 MacLaren families and taking their land. The episode was one of the factors later used against the MacGregors in April 1603 when the entire Clan was outlawed by James VI. It even became an offence to say the name in public. In defiance of this law, a gravestone sighting “MacGregor Despite Them” was added to the family tomb in 1981. 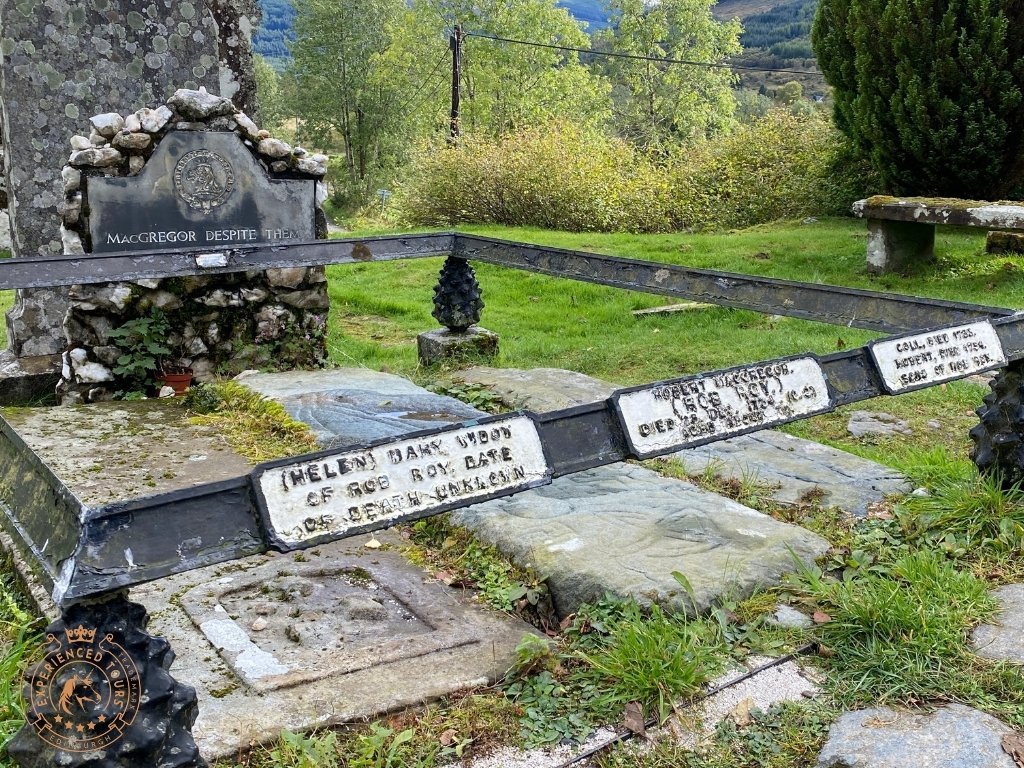 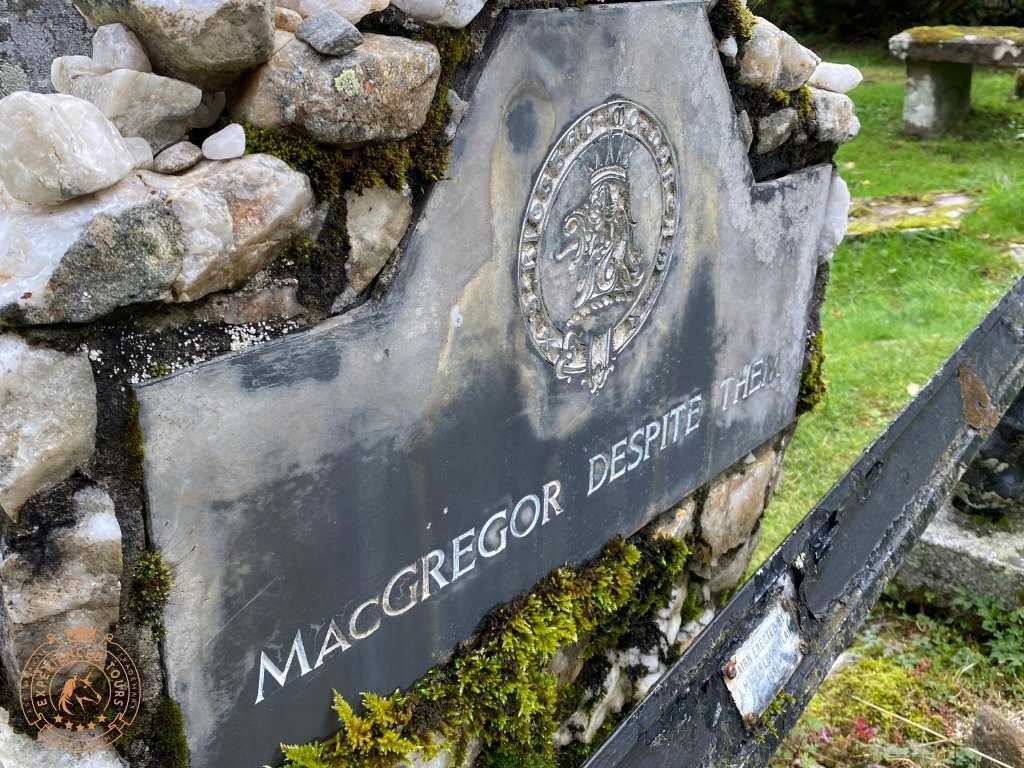 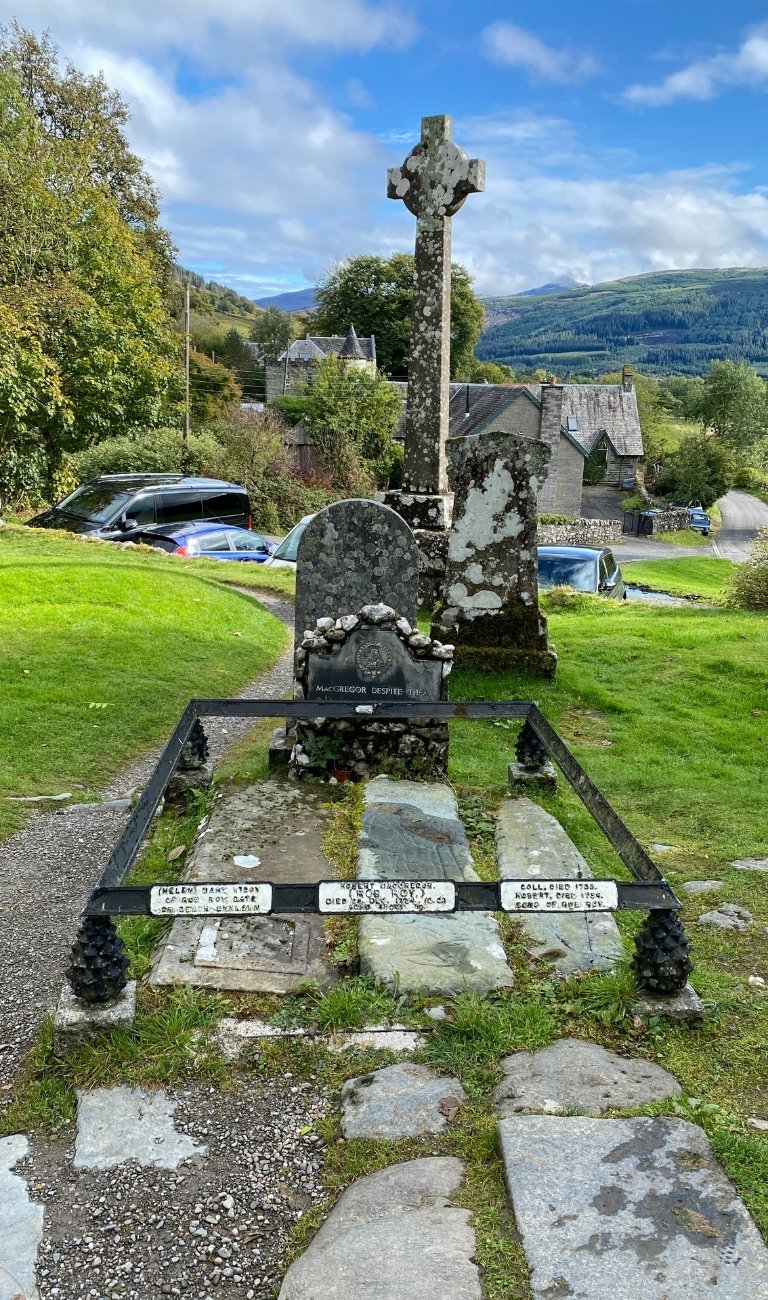