This magnificent castle dominates a clifftop site 12 miles south of the town of Ayr, and is surrounded by a country park.  It overlooks the Firth of Clyde with fine views of the Isle of Arran.

Pronunciation of the name looks difficult, but just remember that you don’t pronounce the ‘z’ so that it sounds like kullane

Culzean is the former home of Kennedy family, one of the oldest clans in Scotland, whose ancestry can be traced right back to Robert the Bruce (1274-1329).

Designed by the renowned architect Robert Adam, the castle incorporated parts of an earlier structure.  Work was carried out in stages over 20 years for David Kennedy, the 10th Earl of Cassilis (pronounced ‘Cassels’). It was completed in 1792. The west wing was added in 1879.

The outstanding feature of the castle is the big drum tower. It has a circular saloon and a magnificent staircase, oval in profile. A fine collection of oil paintings adorn its walls. The impressive entrance hall houses artefacts reflecting Culzean’s history, including one of the largest collections of British military flintlock pistols in the world, as well as numerous military swords. There are also a beautiful, well-lit drawing room and the impressive State dining room.  The large kitchen has shelves of polished pots and pans and all the equipment needed to prepare meals for a big household.

Culzean was handed to the National Trust for Scotland in 1945, in place of the payment of inheritance tax. It was a condition of the transfer that the top floor apartment was to be given to United States General Dwight Eisenhower, as thanks for his role as Commander of the Allied forces in Europe in World War II.  He stayed there on four occasions, once when he was President (1953-1961). Its refurbishment was funded by the donation of American millionaire who had never actuallly visited himself. He was motivated by Eisenhower’s fondness for the castle, a place where he said he could relax.

Around 170 miles of paths make exploring the extensive country park quite easy. Some lead to the long beach below the castle, and one goes right round the swan pond.  The woodland comprises mainly conifers and beech trees. You may be lucky enough to spot red deer and llamas.

The walled garden dates back to the 18th century and is divided into the kitchen garden and the more ornamental pleasure garden. Among the 40 buildings in the grounds are a glasshouse where fruit trees are cultivated.  The gas house was the source of lighting and heat for the castle until 1947. It has a display about gas production. There are also an ice house, the coach house, old stables, a clock tower, and a courtyard.  You will also find the site of the home of a former slave owned by Kennedy family, Scipio Kennedy (1694-1774). A map of the whole estate is available on site.

Open 01 April – 24 October. Country Park (grounds of the castle) are open year round 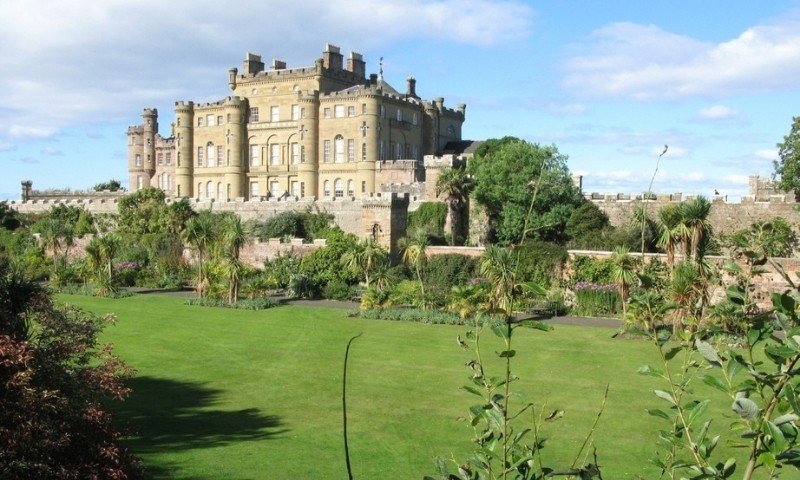 Travel to the sleepy Ayrshire countryside, visit Rabbie Burns Birthplace, Culzean Castle and marvel at fantastic vistas across the Firth of Clyde from Turnberry